As a result, private cloud is best for businesses with dynamic or unpredictable computing needs that require direct control over their environments, typically to meet security, business governance or regulatory compliance requirements.

A public cloud is where an independent, third-party provider, such as Amazon Web Services (AWS) or Microsoft Azure, owns and maintains compute resources that customers can access over the internet. Public cloud users share these resources, a model known as a multi-tenant environment. 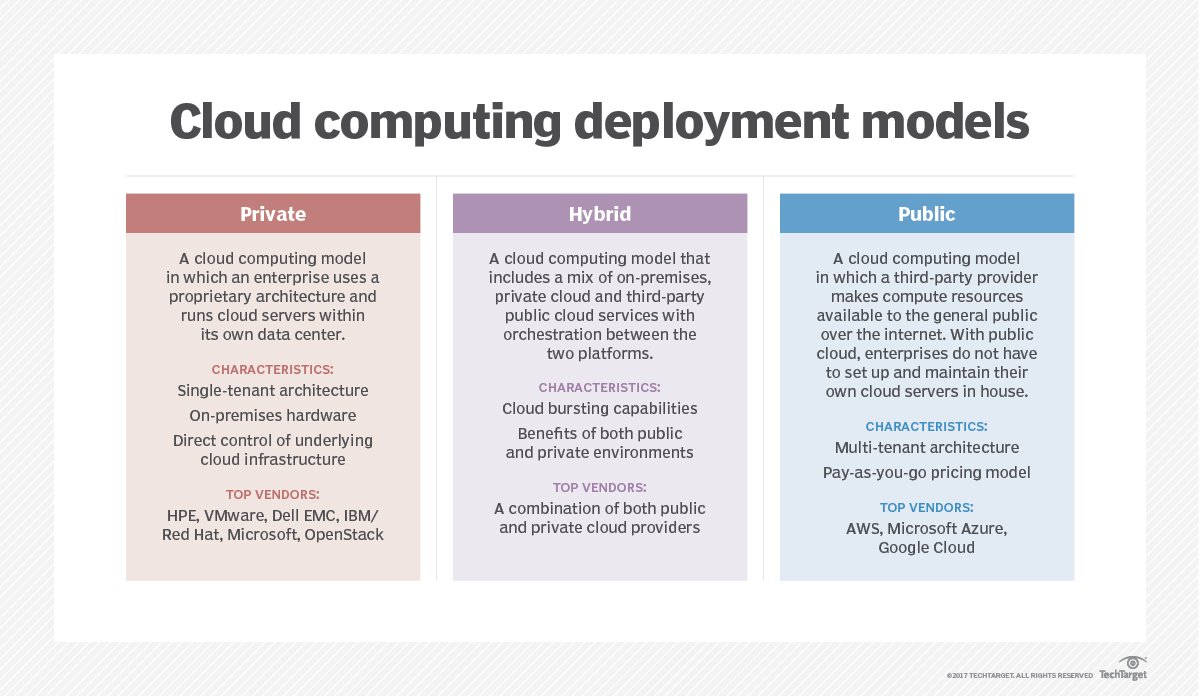 Pros and cons of private cloud

When an organization properly architects and implements a private cloud, it can provide most of the same benefits found in public clouds, such as user self-service and scalability, as well as the ability to provision and configure virtual machines (VMs) and change or optimize computing resources on demand. An organization can also implement chargeback tools to track computing usage and ensure business units pay only for the resources or services they use.

Private clouds are often deployed when public clouds are deemed inappropriate or inadequate for the needs of a business. For example, a public cloud might not provide the level of service availability or uptime that an organization needs. In other cases, the risk of hosting a mission-critical workload in the public cloud might exceed an organization’s risk tolerance, or there might be security or regulatory concerns related to the use of a multi-tenant environment. In these cases, an enterprise might opt to invest in a private cloud to realize the benefits of cloud computing, while maintaining total control and ownership of its environment.

However, private clouds also have some disadvantages. First, private cloud technologies, such as increased automation and user self-service, can bring some complexity into an enterprise. These technologies typically require an IT team to rearchitect some of its data center infrastructure, as well as adopt additional management tools. As a result, an organization might have to adjust or even increase its IT staff to successfully implement a private cloud. This is different than public cloud, where most of the underlying complexity is handled by the cloud provider.

Another potential disadvantage of private clouds is cost. A benefit of public cloud is cost mitigation through the use of computing as a “utility” — customers only pay for the resources they use. When a business owns its private cloud, however, it bears all of the acquisition, deployment, support and maintenance costs involved.

A private cloud is commonly deployed on premises in much the same way a business would build and operate its own traditional data center. However, an increasing number of vendors offer private cloud services that can bolster or even replace on-premises systems.

Some of the largest players in the private cloud market include Hewlett Packard Enterprise (HPE) with its Helion Cloud Suite software, Helion CloudSystem hardware, Helion Managed Private Cloud and Managed Virtual Private Cloud services. VMware is another major player, not just for enabling virtualization with its vSphere product, but also because of its vRealize Suite cloud management platform and its Cloud Foundation Software-Defined Data Center (SDDC) platform for private clouds.

Red Hat has also emerged as a major vendor for private cloud deployment and management with a range of platforms, including OpenStack and Gluster Storage, as well as Red Hat Cloud Suite for management and development.