Skip to content
UDP (User Datagram Protocol) is an alternative communications protocol to Transmission Control Protocol (TCP) used primarily for establishing low-latency and loss-tolerating connections between applications on the internet.Both UDP and TCP run on top of the Internet Protocol (IP) and are sometimes referred to as UDP/IP or TCP/IP. But there are important differences between the two.

In addition, where TCP provides error and flow control, no such mechanisms are supported in UDP. UDP is considered a connectionless protocol because it doesn’t require a virtual circuit to be established before any data transfer occurs.

TCP has emerged as the dominant protocol used for the bulk of internet connectivity due to its ability to break large data sets into individual packets, check for and resend lost packets, and reassemble packets in the correct sequence. But these additional services come at a cost in terms of additional data overhead and delays called latency.

In contrast, UDP just sends the packets, which means that it has much lower bandwidthoverhead and latency. With UDP, packets may take different paths between sender and receiver and, as a result, some packets may be lost or received out of order.

UDP is an ideal protocol for network applications in which perceived latency is critical, such as in gaming and voice and video communications, which can suffer some data loss without adversely affecting perceived quality. In some cases, forward error correction techniques are used to improve audio and video quality in spite of some loss.

UDP can also be used in applications that require lossless data transmission when the application is configured to manage the process of retransmitting lost packets and correctly arranging received packets. This approach can help to improve the data transfer rate of large files compared to TCP.

The user datagram protocol has attributes that make it advantageous for use with applications that can tolerate lost data.

The User Datagram Protocol header has four fields, each of which is 2 bytes. They are: 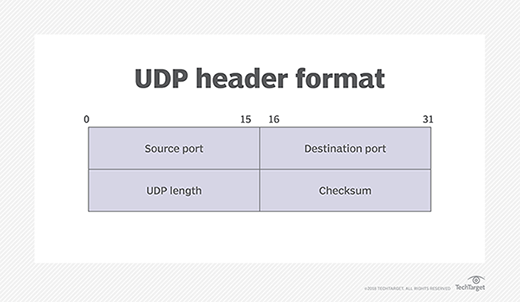