Megabits per second (Mbps) are a unit of measurement for bandwidth and throughput on a network. Each megabit is equal to 1 million bits.

Mbps vs. MBps: What’s the difference?

Although they share the same letters, the abbreviations Mbps and MBps have different meanings. MBps stands for megabytes per second, with the bytes suffix referring to a unit of measurement for file size. In contrast, Mbps represents the bit capacity of a network connection.

A bit is not the same size as a byte, so Mbps and MBps are not interchangeable. Each byte contains eight bits. The following formulas can be used to convert each metric: 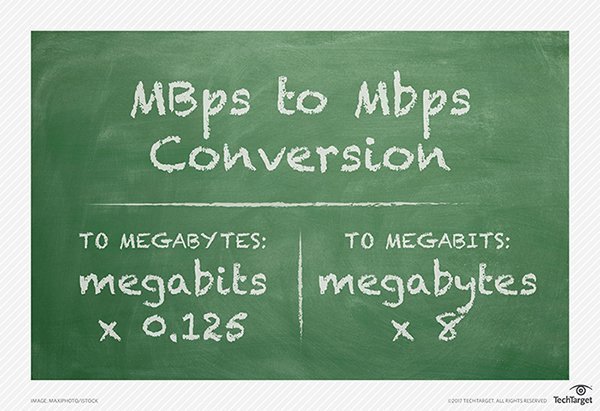 It should be noted that adding more Mbps of bandwidth does not guarantee faster network transmissions, which include upload speed and download speed. Bandwidth is a measurement of network capacity — that is, the maximum volume of data that can be transferred in one second. Factors like congestion and latency can reduce a connection speed or cause it to fluctuate. Internet service providers and network equipment vendors often advertise “up to” a certain number of Mbps, indicating a theoretical maximum that is unlikely to be achieved at all times outside of a laboratory.

That said, it is possible to estimate download times using the formulas provided above. For example, to download a 100 MB audio file over a 100 Mbps internet connection, the following calculations help determine the approximate download time of the audio file:

How are Mbps network connections categorized?

Among internet service providers, the most common sizes of Mbps speeds offered are:

Among network equipment vendors, devices like switches are often advertised as “10/100 Mbps,” which means its ports can support 10 and 100 Mbps Ethernet connections.