Unshielded twisted pair (UTP) is a ubiquitous type of copper cabling used in telephone wiring and local area networks (LANs). There are five types of UTP cables — identified with the prefix CAT, as in category — each supporting a different amount of bandwidth.

Alternatives to UTP cable include coaxial cable and fiber optic cable. There are benefits and tradeoffs to each type of cabling, but broadly speaking, most enterprises favor UTP cable due to its low cost and ease of installation.

Inside a UTP cable is up to four twisted pairs of copper wires, enclosed in a protective plastic cover, with the greater number of pairs corresponding to more bandwidth. The two individual wires in a single pair are twisted around each other, and then the pairs are twisted around each other, as well. This is done to reduce crosstalk and electromagnetic interference, each of which can degrade network performance. Each signal on a twisted pair requires both wires.

Twisted pairs are color-coded to make it easy to identify each pair. In North America, one wire in a pair is identified by one of five colors: blue, orange, green, brown or slate (gray). This wire is paired with a wire from a different color group: white, red, black, yellow or violet. Typically, one wire in a pair is solid-colored, and the second is striped with the color of its mate — e.g., a solid blue wire would be paired with a white-and-blue striped wire — so they can be easily identified and matched. 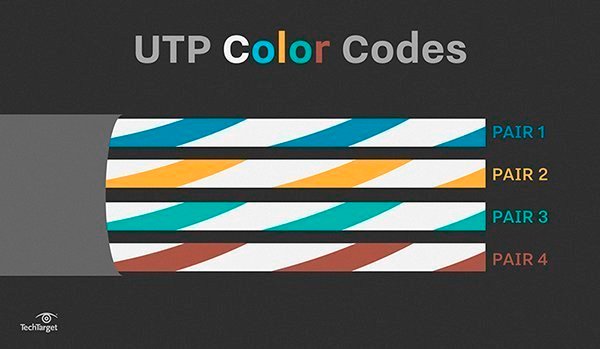 The five categories of UTP cable are defined by the TIA/EIA 568 standard:

The most common connector used with UTP cable is an RJ-45.

The unshielded in UTP refers to the lack of metallic shielding around the copper wires. By its very nature, the twisted-pair design helps minimize electronic interference by providing balanced signal transmission, making a physical shield unnecessary. In addition, different twist rates — that is, varying the amount of twists between different pairs — can also be used to reduce crosstalk. Because these protections come from how the wires are physically laid out, bending or stretching a UTP cable too much can damage the pairs and make interference more likely to occur.

In a shielded twisted pair (STP), the wires are enclosed in a shield that functions as a grounding mechanism. This is done to provide greater protection from electromagnetic interference and radio frequency interference; however, STP cable is more expensive and difficult to install, compared with UTP. 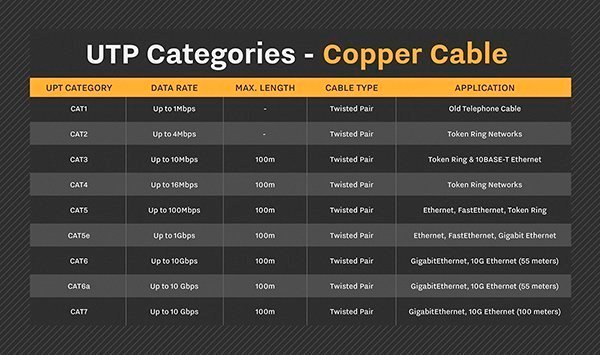