A service-level agreement (SLA) is a contract between a service provider and its internal or external customers that documents what services the provider will furnish and defines the service standards the provider is obligated to meet.

Why are SLAs important?

Service providers need SLAs to help them manage customer expectations and define the circumstances under which they are not liable for outages or performance issues. Customers can also benefit from SLAs in that they describe the performance characteristics of the service, which can be compared with other vendors’ SLAs, and also set forth the means for redressing service issues — via service credits, for example.

What goes into an SLA?

In broad terms, an SLA will typically include a statement of objectives, a list of the services to be covered by the agreement and will also define the responsibilities of the service provider and customer under the SLA. 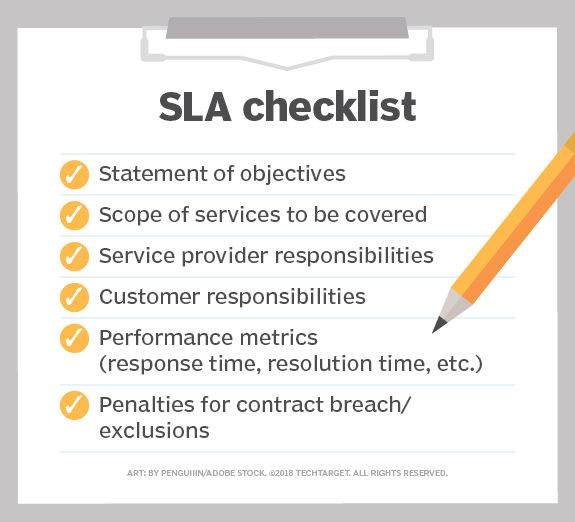 SLAs establish customer expectations with regard to the service provider’s performance and quality in a number of ways. Some metrics that SLAs may specify include the following:

An SLA may specify availability, performance and other parameters for different types of customer infrastructure — internal networks, servers and infrastructure components such as uninterruptable power supplies, for example.

The SLA will also include a section detailing exclusions, that is, situations in which an SLA’s guarantees — and penalties for failing to meet them — don’t apply. The list might include events such as natural disasters or terrorist acts. This section is sometimes referred to as a force majeure clause, which aims to excuse the service provider from events beyond its control.

Who needs a service-level agreement?

SLAs are thought to have originated with network service providers, but are now widely used in a range of IT-related fields. Companies that establish SLAs include IT service providers, managed service providers and cloud computing service providers. Corporate IT organizations, particularly those that have embraced IT service management (ITSM), enter SLAs with their in-house customers — users in other departments within the enterprise. An IT department creates an SLA so that its services can be measured, justified and perhaps compared with those of outsourcing vendors.

Over the years, SLAs have expanded to govern a growing set of IT procurement models. When IT outsourcing emerged in the late 1980s, SLAs evolved as a mechanism to govern such relationships. SLAs set the expectations for a service provider performance and established penalties for missing the targets and, in some cases, bonuses for exceeding them. Since outsourcing projects were frequently customized for a particular customer, outsourcing SLAs were often drafted to govern a specific project.

As managed services and cloud computing services became more prevalent in recent years, SLAs evolved to address those approaches. Shared services, rather than customized resources, characterize the newer contracting methods, so SLAs tend to be broad agreements intended to cover all of a service provider’s customers.

SLAs, regardless of type, are subject to modification over time. Service providers will periodically review and update SLAs to reflect the addition of new services, changes to existing services or changes in the overarching regulatory environment.