Skip to content
NVMe over Fabrics (NVMe-oF) is a technology specification designed to enable nonvolatile memory express message-based commands to transfer data between a host computer and a target solid-state storage device or system over a network, such as Ethernet, Fibre Channel (FC) or InfiniBand.NVM Express Inc., a nonprofit organization comprising more than 100 member technology companies, published version 1.0 of the NVMe-oF specification on June 5, 2016. A workgroup within the same organization released version 1.0 of the NVMe specification on March 1, 2011. NVMe version 1.3, released in May 2017, added features to enhance security, resource sharing and solid-state drive (SSD) endurance.Vendors are working to develop a mature enterprise ecosystem to support end-to-end NVMe-over Fabrics, including the server operating system (OS), server hypervisor, network adapter cards, storage OS and storage drives.

The NVM Express organization estimates that 90% of the NVMe-oF protocol is the same as the NVMe protocol, which is designed for local use over a computer’s Peripheral Component Interconnect Express (PCIe) bus.

NVMe over Fabrics vs. NVMe

One of the main distinctions between NVMe and NVMe over Fabrics is the transport-mapping mechanism for sending and receiving commands and responses. NVMe-oF uses a message-based model for communication between a host and a target storage device. Local NVMe maps commands and responses to shared memory in the host over the PCIe interface protocol. 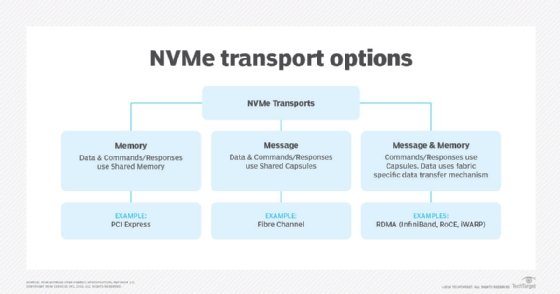 The NVM Express consortium defines NVMe-oF as a “common architecture that supports a range of storage networking fabrics for NVMe block storage protocol over a storage networking fabric. This includes enabling a front-side interface into storage systems, scaling out to large numbers of NVMe devices and extending the distance within a data center over which NVMe devices and NVMe subsystems can be accessed.”

NVMe-oF enables the use of alternate transports to PCIe that extend the distances across which an NVMe host device and NVMe storage drive or subsystem can connect. The original design goal for NVMe over Fabrics was to add no more than 10 microseconds of latencybetween an NVMe host and a remote NVMe target storage device connected over an appropriate networking fabric versus the latency of an NVMe storage device using a local server’s PCIe bus. 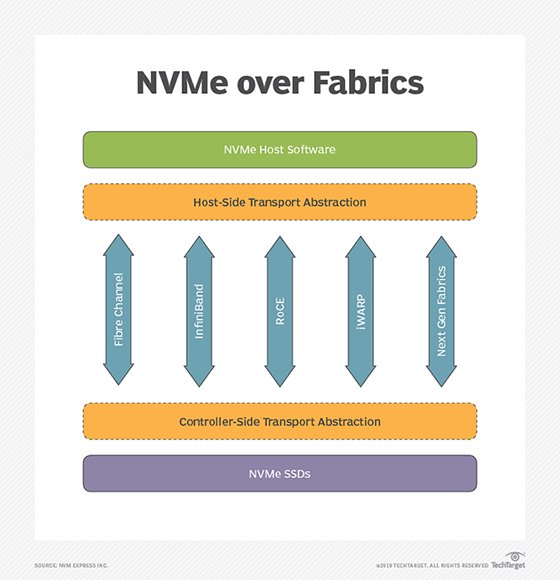 NVMe is an alternative to the Small Computer System Interface (SCSI) standard for connecting and transferring data between a host and a peripheral target storage device or system. SCSI became a standard in 1986, when hard disk drives (HDDs) and magnetic tape were the most common storage media. NVMe is designed for use with faster media, such as SSDs and post-flash memory-based technologies. The NVMe standard speeds access times by several orders of magnitude compared to SCSI and Serial Advanced Technology Attachment (SATA) protocols developed for rotating media.

NVMe flash evolved as a consequence of the growing use cases for high-performance flash drives. Traditional SCSI-based file commands sufficed when disk storage dominated in enterprises. But SCSI struggles to deliver the performance level that enterprises demand for scale-out storage.

In comparison to SCSI, the NVMe standard provides a more streamlined register interface and command set to reduce the CPU overhead of the input/output (I/O) stack. The streamlined NVMe command set uses less than half the number of instruction sets than other storage protocols. Benefits of NVMe-based storage drives include lower latency, additional parallel requests and higher performance.

NVMe supports 64,000 queues, each supporting a queue depth up to 64,000 commands. All I/O commands, along with the subsequent responses, operate on the same processor core, parlaying multicore processors into a high level of parallelism. I/O locking is not required, since each application thread gets a dedicated queue.

It is widely believed that NVMe SSDs eventually will supplant SATA and Serial Attached SCSI (SAS)-based SSDs as the default flash media in enterprise data centers. NVMe form factors include add-in cards, U.2 2.5-inch and M.2 SSD devices.NVMe-based devices transfer data using a PCIe serial expansion slot, meaning there is no need for a dedicated hardware controller to route network storage traffic. Using NVMe, a host-based PCIe SSD is able to transfer data more efficiently to a storage target or subsystem.PCIe-connected NVMe SSDs allow applications to talk directly to storage. A PCIe 3.0 device with four lanes can deliver about 4 Gbps of bandwidth per device.

While it mirrors the performance characteristics of PCIe Gen 3, NVMe lacks a native messaging layer to direct traffic between remote hosts and NVMe SSDs in an array. NVMe-oF is the industry’s response to developing a messaging layer.

RDMA is a memory-to-memory transport mechanism between two computers. Data is sent from one memory address space to another, without invoking the OS or the processor. Lower overhead and faster access and response time to queries are the result, with latency usually in microseconds.

NVMe serves as the protocol to move storage traffic across RDMA over Fabrics. The protocol provides a common language for compute servers and storage to communicate regarding the transfer of data.

NVMe over Fabrics using RDMA essentially requires implementing a new storage network that bumps up performance. The tradeoff is reduced scalability compared to what you get by using the FC protocol.

NVMe over Fabrics using Fibre Channel (FC-NVMe) was developed by the T11 committee of the InterNational Committee for Information Technology Standards (INCITS). FC allows the mapping of other protocols on top of it, such as NVMe, SCSI and IBM’s proprietary Fibre Connection (FICON), to send data and commands between host and target storage devices.

FC-NVMe and Gen 6 FC can coexist in the same infrastructure, allowing data centers to avoid a forklift upgrade.

Initial deployments of NVMe have been as direct-attached storage (DAS) in servers, with NVMe flash cards replacing traditional SSDs as the storage media. This arrangement offers promising performance gains when compared with existing all-flash storage, but it also has its drawbacks.

NVMe requires the addition of third-party software tools to optimize write endurance and data services. Bottlenecks persist in NVMe arrays at the level of the storage controller.

NVMe-oF represents the next phase in the evolution of the technology, paving the way for the arrival of rack-scale flash systems that integrate native end-to-end data management. The pace of mainstream adoption will depend on how quickly across-the-stack development of the NVMe ecosystem occurs.

In December 2017, IBM previewed an NVMe-oF InfiniBand configuration integrating its Power9 Systems and FlashSystem V9000, a product it said is geared for cognitive workloads that ingest massive quantities of data.

Dell EMC was one of the first storage vendors to bring an all-flash NVMe product to market. The DSSD D5 array was built with Dell PowerEdge servers and a proprietary NVMe-over-PCIe network mesh. The product was shelved in 2017 due to poor sales.

A handful of startups have also launched NVMe all-flash arrays: