In the past few years, the volume of east-west traffic has grown as a result of virtualization and data center trends such as converged infrastructure. Today, network controllers, virtual machines (VMs) and other devices perform various functions and services that previously ran on physical hardware. As these components relay data to each other, they increase traffic on the network, which in turn, can cause latency issues that negatively impact network performance. For example, if hosts on one access switch need to quickly communicate with systems on another access switch, uplinks among the access layer and aggregation layer become congested.

To compensate, many organizations have migrated from traditional three-layer data center architectures to various forms of leaf-spine architectures. The simplicity of a leaf-spine approach is well-suited to handling higher volumes of east-west traffic; leaf switches consolidate traffic from users and then connect to the spine, which comprises the network core of servers and storage systems. 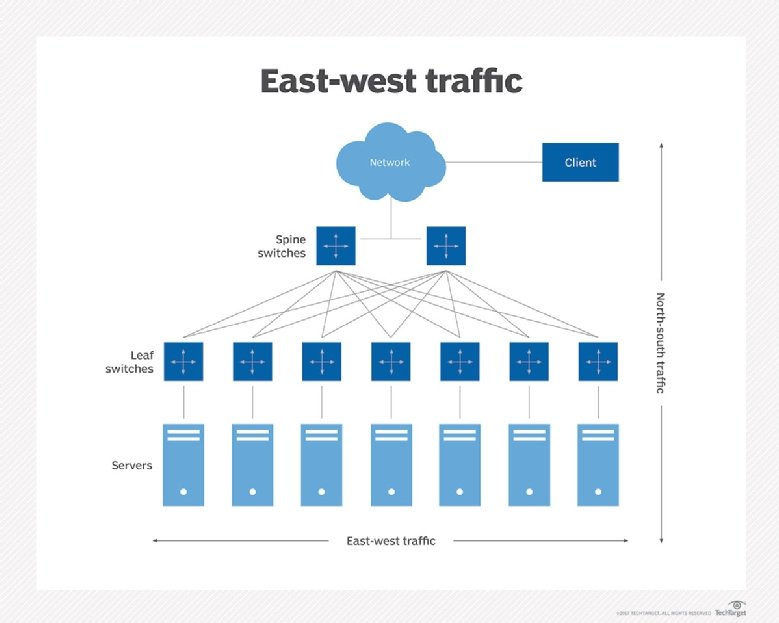 Microsegmentation can significantly reduce the surface available for malicious activity and lessen the impact of an attack on east-west traffic. If the data center is segmented into logical units, data center administrators can tailor unique security policies and rules for each logical unit. This tighly-coupled approach eliminates the tedious, error-prone manual configuration processes that often lead to security flaws after a migration.

Software-defined networking (SDN) provides another level of control and management to east-west traffic. Organizations that deploy a software-defined network on a leaf-spine fabric can take advantage of the equal nature of each port and also retain the advantages of security zones, traffic engineering and virtual overlay networks. With an SDN controller that manages edge policies for each port, policies can be moved with a workload. This makes the fabric more agile and responsive to business needs, thus making east-west traffic management more efficient.